Ph.D. Natalia Zalewska, specialist in the field of geological exploration on Mars, represented the Institute of Aviation at prestigious world-renowned conference for teachers. The second edition of the event took place October 26th in Warsaw.

Campus Seminar is a world-wide event, that at the same time is taking place in w Finland, the Netherlands, Sweden, Lithuania and Poland. The speakers of the conference are prominent experts, scientists and journalists, who inspire listeners to independently search for answers to the most important questions of today’s world.

This year, the Polish edition appeared, Ph.D. Natalia Zalewska, who gave a presentationpt titled „What next for the Mars? Research, plans and hopes”. The speaker presented the history of water exploration on Mars. She described scientific hypotheses on the origin of channels and canyons of the Valles Marineris on Mars and she told about another geological discoveries suggesting the presence of water on the planet, made using space probes and rovers. Ph.D. Natalia Zalewska is a specialist in the field of geological exploration of Mars, conducted on the basis of research Mars Express and Mars Reconnaissance Orbiter satellites . In 2005 she took part in analog mission on this planet, organized by the Mars Society, which took place at the base of the Martian desert in Utah. In the Institute of Aviation she realize the project „The geological structure of the most ancient of Mars craters from the Late Heavy Bombardment period based on spectrophotometric data from the Mars Express and Mars Reconnaissance Orbiter probes and comparative analysis with the oldest earthly impact craters on the basis of satellite images”.

6th Night at the Institute of Aviation, October 16

On October 16th was organized the “6th Night at the Institute of Aviation”, the largest educational event in Warsaw, whose aim was to promote aerospace sector in Poland and engineering professions. The event was held from 5 pm. till 11 pm. at the Institute of Aviation in Warsaw. This unusual event was aimed at all fans of aviation, aircraft, space, science, technology, and also at those who are curious and like to actively spend their free time.

There were plenty of attractions and events related to aviation and cosmos. On this particular night the Institute of Aviation provided its visitors modern chassis, materials and repairs laboratories. For the first time the cutting-edge bearing test lab opened in 2014 was available for visitors. Also opened were the wind tunnels, including Poland’s largest low-speed tunnel with a diameter of 5 meters and Earth Observation Mission Control Center created by Remote Sensing Division. Visitors could make a tour on Mars in 3D vision. Each guest could make a cosmic selfie by our Quercus camera. 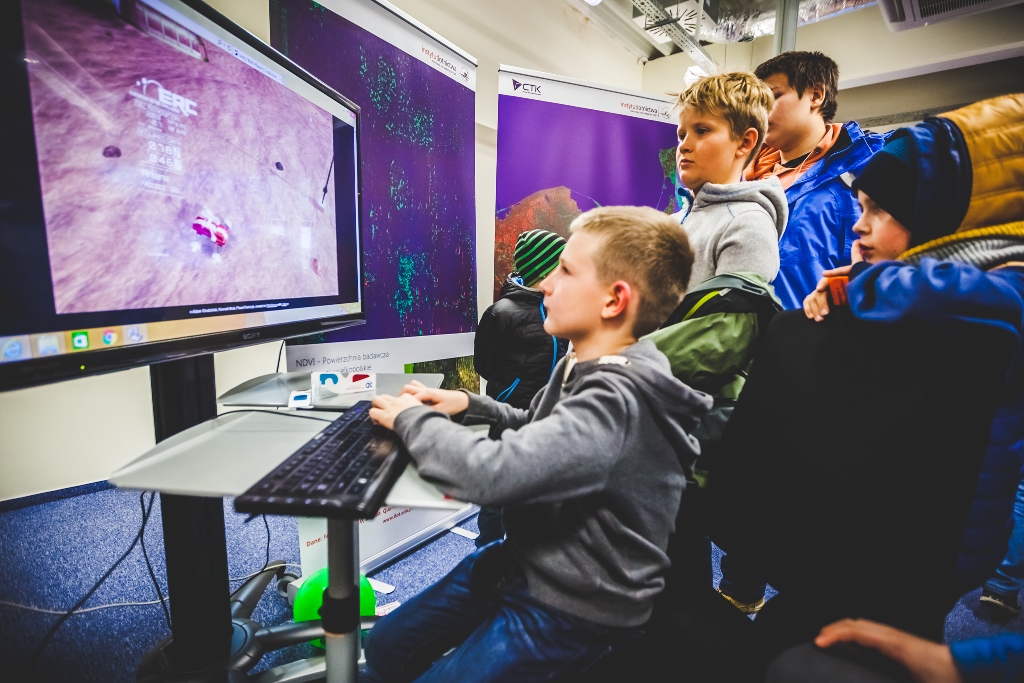 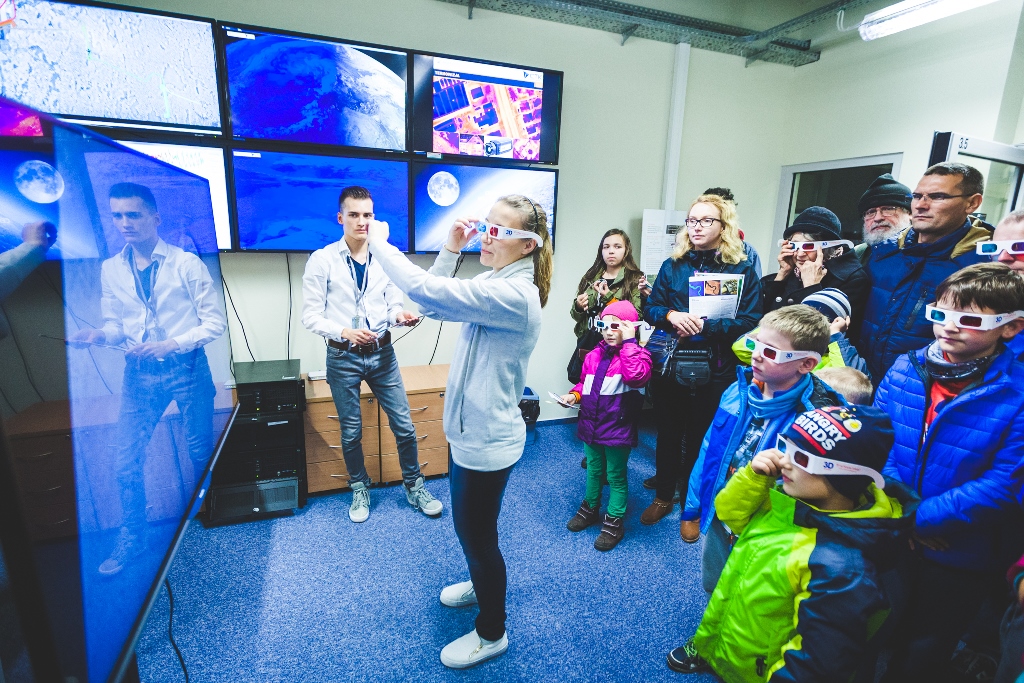 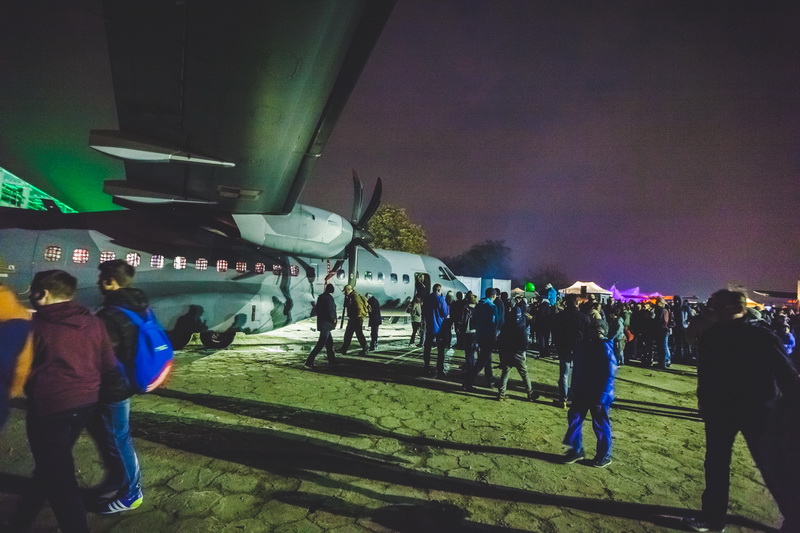 The International Defence Industry Exhibition was a great success for the Institute of Aviation. During the fair many contractors and army representatives showed interest in cooperation with the Institute. This year at the Institute’s stand were presented: the unmanned plane ILX-32 “MOSUPS” and the experimental rocket ILR-33 “Bursztyn”. Three preliminary agreements were signed with the following companies: MESKO S.A, ZPS Gamrat and Jakusz Sp. z.o.o.

During the International Defence Industry Exhibition equipment covering all segments of military production were presented: military engineering equipment, artillery and missile systems, reconnaissance systems and logistics equipment. During the exhibition you could see among others, the most modern communication equipment, IT systems, emergency rescue, and defense against weapons of mass destruction for the Border Guard, Police, Fire Service and Civil Defence.

Remote Sensing Division exhibited at the fair in Kielce its unique multisensor platform and a poster showing the scope of our activity. 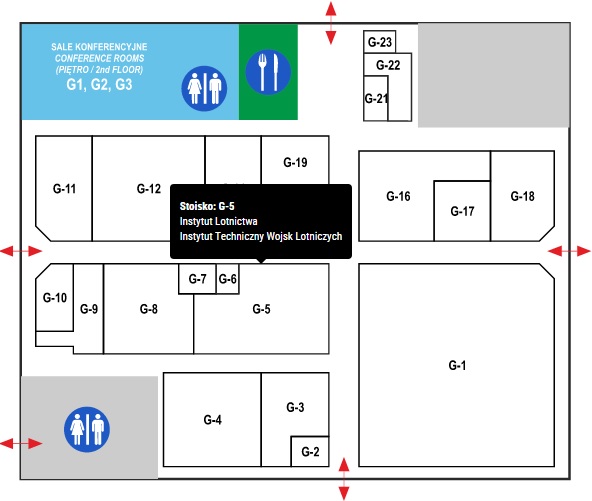 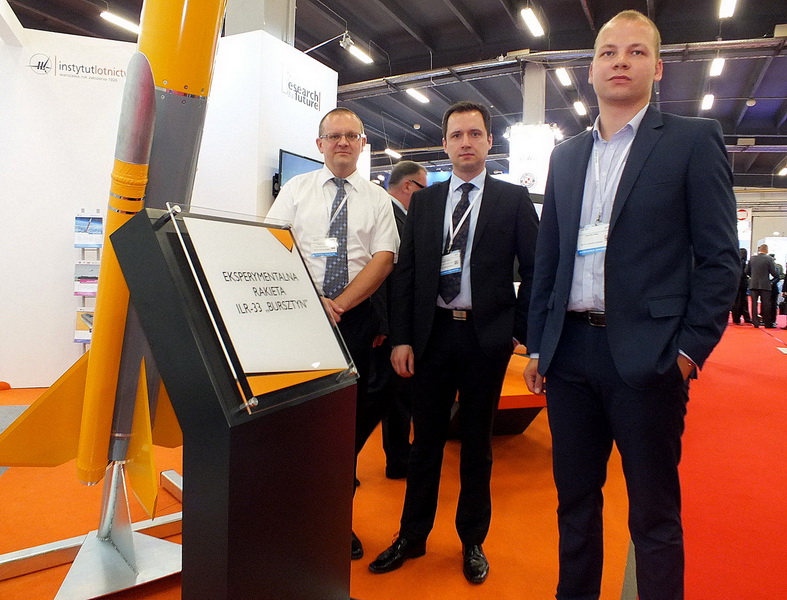 May 22  Remote Sensing Devision of Institute of Aviation (Space Technology Centre) took part in the event “Night of Robots” organized by Industrial Institute of Automation and Measurements in Warsaw.

For visitors there were many cosmic attraction!

I. cosmic selfie
Visitors were invited to the fascinating world of multispectral imaging. We presented to them the image differences in various ranges of electromagnetic radiation. They could take a picture by multispectral camera and choose the most favorable the spectral extract. Photo in the chosen spectrum along with a photo of forests, studied under the HESOFF program in the selected spectral range they got by e-mail.

II. Walk around Mars
Using the advanced algebraic and topological tools in Remote Sensing Department we create a three-dimensional terrain models, eg. part of the Mars surface. At our stand you could walk through the Red Planet’s northern plains, and even look to the impact craters there. The youngest “experts” and enthusiasts of issues related to Mars also held discussions on this still very mysterious, although not so distant, planet.

III. Martian place
Let’s imagine that we’re going on a journey to Mars, wthat will be wainting for us there? Only cold and unfriendly rocky desert. And how was there billions of years ago? Water flowed on Mars, it had a thick atmosphere – the perfect place for the birth of life. Unfortunately, the human foot has not stopped there but the transferred data from the Mars probes and rovers confirm our suspicions about the turbulent past of Mars. What made that today Mars looks different? This conundrum is still not unraveled. Visitors to our stand were trying get close latest evidence for the existence of rivers and seas in the ancient history of Mars and the approximate when had finished the time of its former glory. We also invited to view photos of the planet’s surface in 3D.

IV. Biomass and images processing
Participants of the “Night of Robots” were invited to get to know the world of plants seen in many spectral bands. Visitors could compare the spectral signature for different types of plants (biomass) depending on the condition and physiological state of the plant. We showed how the multispectral platform characterized the state of health of biomass and allows to differentiate a vegetation types according to NDVI index.

At our stand you could also see a fascinating presentation about Mars, alternative power sources of unmanned aircraft, aerial missions, the biomass and images processing. 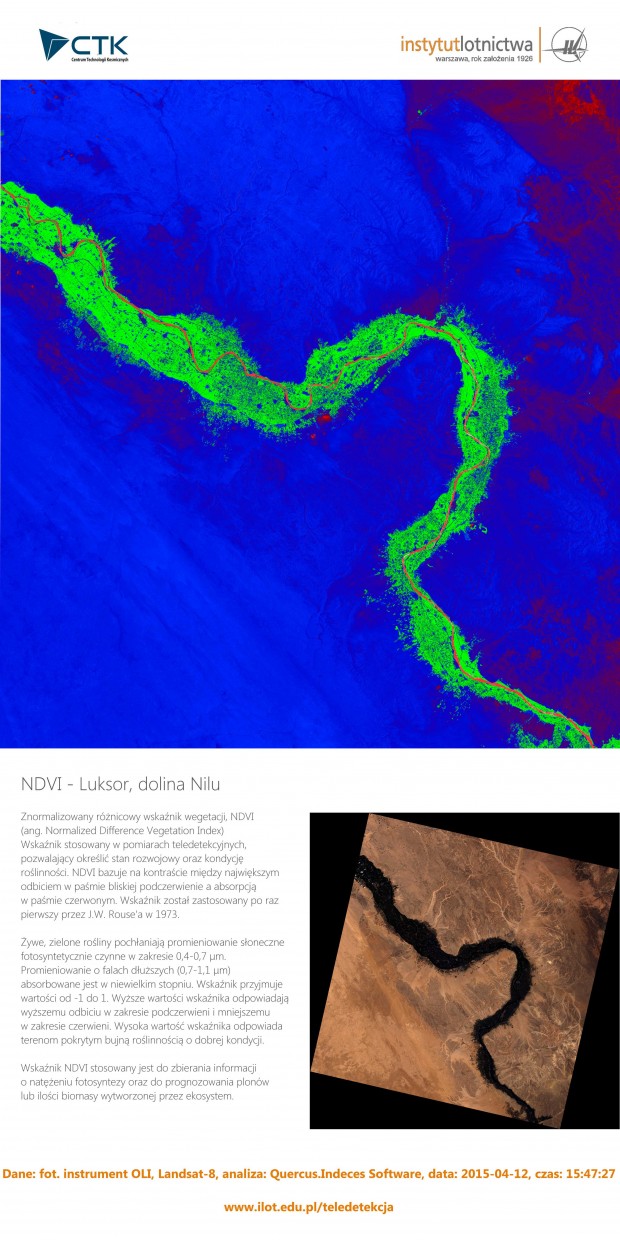 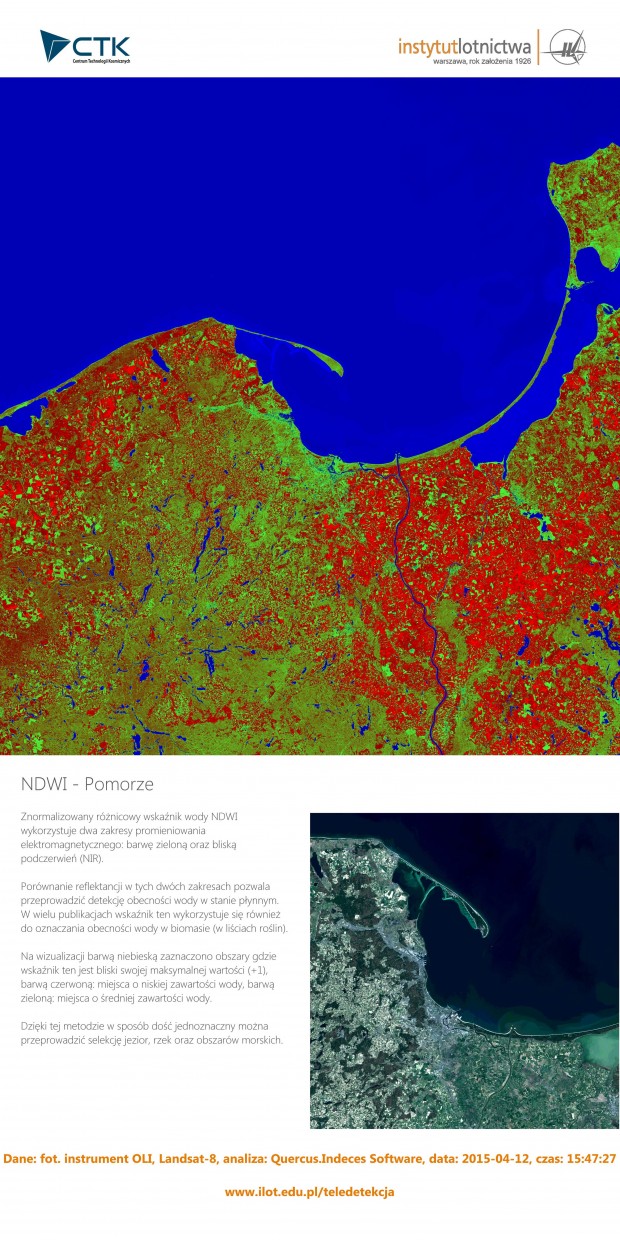 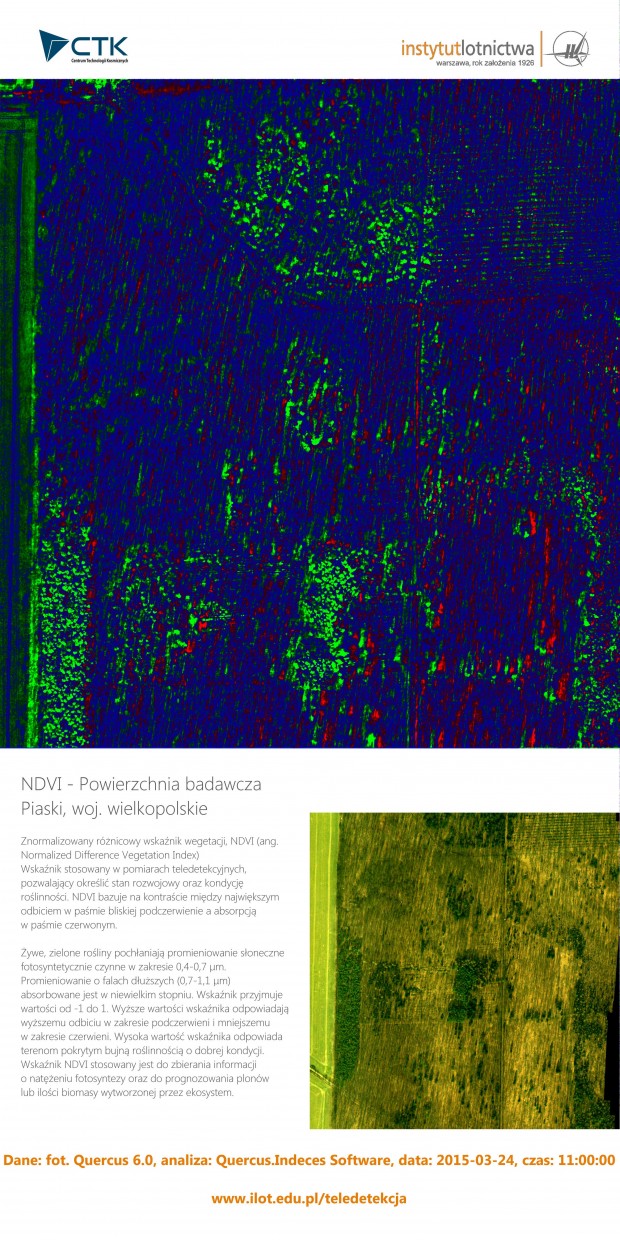 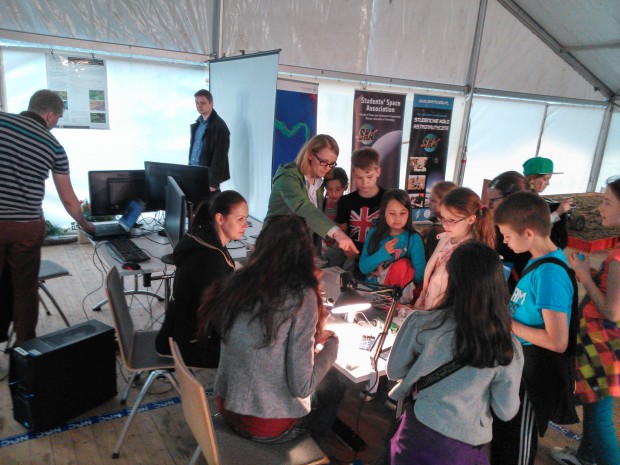 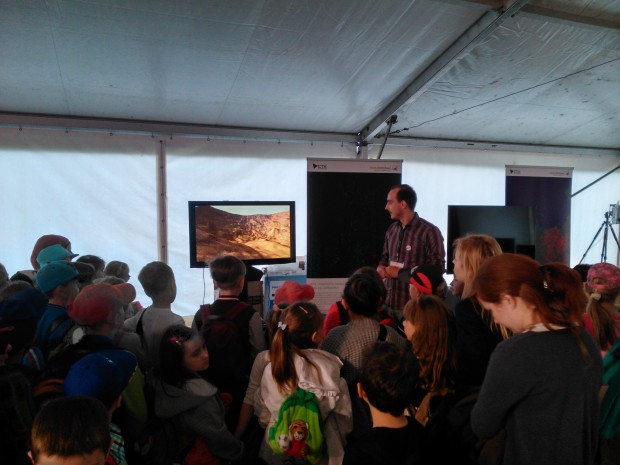 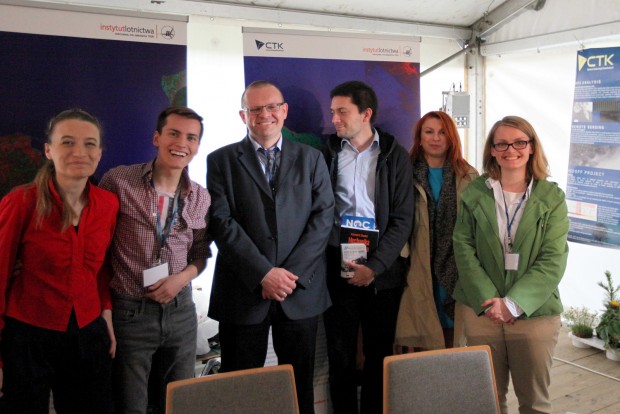 A lot of excitement among the youngest participants of the event triggered a mini-aircraft models powered by energy from photovoltaic panels. Self-charging car and especially the pilot to steer the vehicle was very popular and was literally in constant demand. The hardest part was to answer questions related to this, where “hides” this solar energy. Children very resolutely tried to construct answers to the questions of their peers and in interesting way to stay ahead in the responses of our specialists from energy acquired in an alternative way. Many of them betrayed interest in the subject, probably based on the experience of their parents.

All visitors to our stand we congratulate a good investment of time. See you at the “Sixth Night of the Institute of Aviation”. And that time is fast flows you should now book yourself time to thrilling encounters with science and technology not only air on October 16, 2015.

And all who listened with such interest and asked many questions of research and our common concern about the health of oak trees now invite to an international conference titled “European Oak Decline Phenomenon – causes, monitoring and possible mitigation measures,” which will take place on 6 and 7 July in Warsaw and Sękocin.

2015 May 20 during Symposium of Young Scientists organized by the Faculty of Physics, University of Warsaw, was presented poster titled “The application of algorithms of iterative factor analysis multispectral images in the assessment of forest biodiversity”. Poster in abbreviated form included the results of the work on the remote detection of biodiversity conducted in the Remote Sensing Department in the HESOFF project.

Next to the work of physicists from the University of Warsaw related to lidar research of the atmosphere chemical composition our presentation was the only one in the field of remote sensing widely understood. 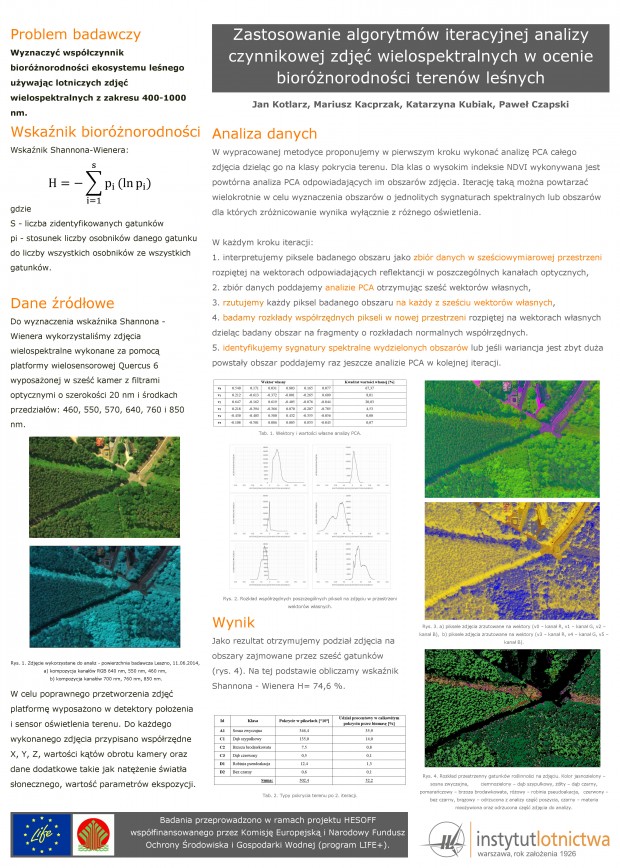 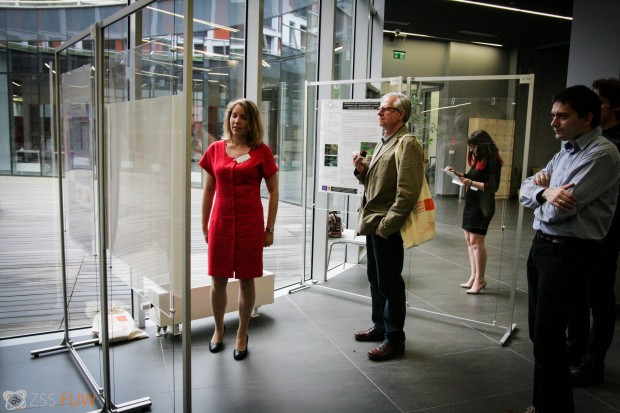 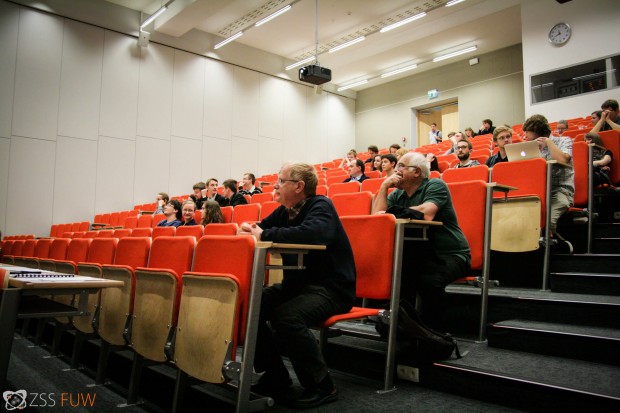