The aim of the research is to present the mineralogy of Mars impact craters dating from the Late Heavy Bombardment such as Hellas Argyre Isidis formed in Noachian period (4,5- 3,5 Ga) between 3,9-3,8 Ga and terrains with its craters from later eras Hesperian and Amazonian – Mawrth Vallis, Oxia Planum, Hypanis Vallis and Aram Dorsum,which will be examined in future ESA ExoMars mission planned for 2016, designed to look for signs of life and organic compounds. The mission provides for the rover’s landing in the vicinity of the above mentioned areas. Therefore, the research especially takes into account occurrence of minerals formed in the aquatic environment, and thereby determine the conditions conducive to the creation of life on Mars on these areas. Data will be acquired from the OMEGA apparatus, PFS installed on the Mars Express probe, CRISM – MRO probe, and photos of the Mars surface obtained from the apparatus CTX and HiRISE also installed on the probe MRO will be used. The main attention will be paid to the occurrence of clay minerals that are particularly associated with the existence of water in the period of Noachian (4,5- 3,5 Ga). 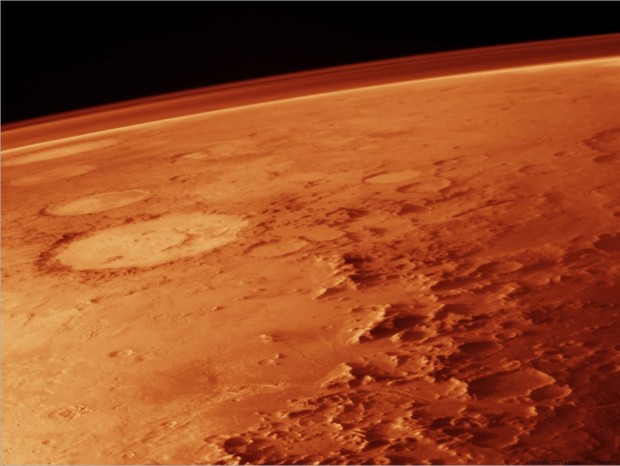 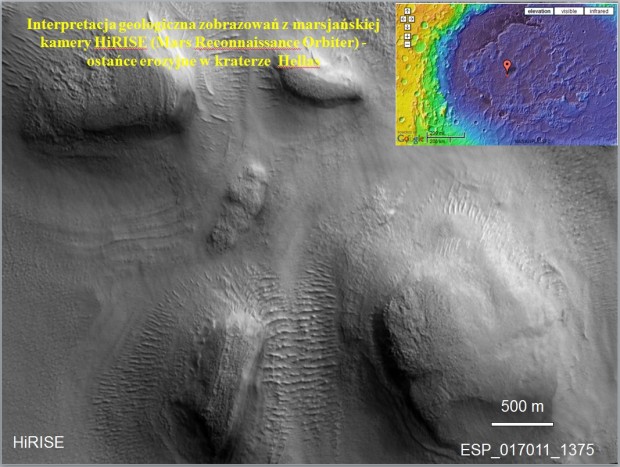 Examination will consist in attempt to determine whether the water appeared only in Noachianie or in subsequent ages and whether clay minerals are related to this epoch. The final result will be mineralogical mapping of these areas. Comparative analysis of earthly craters and obtaining samples of these craters can help determine the geology of the area by correlations of infrared spectra of the surface of the oldest Mars craters and the corresponding rocks spectra of the oldest earthly craters. (e.g. Vredefort in RPA and Sudbury in Canada). Observational material subjected to analysis will be the spectrum of PFS spectrometer infrared long-term channel (LW) 5-45 microns (2000-222 cm -1 ) of Mars Express probe. The analysis will consist in capture such characteristic bands of emission / absorption that do not belong to the known spectra of the components of the Mars atmosphere or CO2, H2O, ice crystals and dust. Obtained emission spectrum will be carefully monitored for finding interesting minima (bands), and then compared with the infrared spectra of minerals.

Mineral spectra for comparison in emissivity will be taken from online libraries, then the spectrum of these minerals will be modeled deconvolution method For the interpretation of mineralogical spectra. The spectra obtained from OMEGA and CRISM spectrometer include shortwave (to 5.2 micrometres) infrared range, and their interpretation is based on multispectral images of the surface reflectance. For the interpretation will be taken channel SWIR-C data 0,93-2,73 µm (10752-3663 cm-1). The spectra will be interpreted after the automatic separation of the atmosphere in the ENVI programme. The interpretation of the spectra primarily will be based on the USGS Digital Spectral Library and spectra of taken earlier earthly craters samples. Comparison of the results from the study of OMEGA and CRISM PFS spectra offers greater scope for mineralogical interpretation of selected Mars areas. The project aims is to deepen the knowledge of the geology and atmosphere Mars, which will be presented in the form of maps. The purpose of the project is to identify the potentially most interesting places to planning space missions for research on the existence of some forms of life signs. Another result of the research will be presented scientific presentations at international conferences devoted to issues of planetary and publications in prestigious journals.